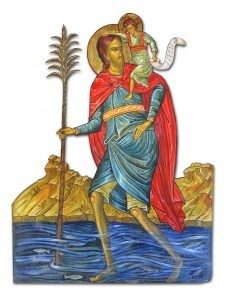 From the life of St. Christophorus

St. Christopher appears on icons and pictures as a tall figure, almost like a giant, wading through a stream, carrying a staff in his left hand, and the Christ Child on his shoulders.

According to a legend, he took on the task of bringing people on his back across a dangerous river. One night there came a child who wanted to be carried across the river, but when he got into the water with the boy on his shoulder, the boy’s weight grew so much that he feared drowning. He believed the whole world lay on his shoulders.

“You carried more than the world,” the child said to him, “the Lord who created the world was your burden.” It pushed him under the water and thereby baptizing him. Arriving on the other bank, Christophorus recognized Christ as his Lord, who commanded him to return to the other shore and stick his staff in the ground: as confirmation of his baptism, he would see the staff turning green and blooming. And so it happened.

Already in 452 a church was consecrated in Chalcedon to the “Christ carrier” (this is the translation of the Greek name “Christophoros”). After his baptism, he is said to have traveled as a missionary of the Christian faith through Lycia supporting persecuted Christians. According to tradition, he was then captured himself and imprisoned and finally died the martyr’s death after long trials.

Legend and historical tradition give the image of a saint who has been martyred for his confession of Christ. His relics were first kept in Toledo and were later transferred to the abbey of St. Denis in Paris.

Colossal statues of the saint were erected in Western Christendom probably because of his enormous size. The Strasbourg Cathedral has a 7 to 8-meter-high statue of Christophorus, whose inscription states that every believer looking at a picture of the saint will be saved from sudden unforeseen death. Similarly, on the west wall of the Romanesque St. Michael’s Church in Altenstadt near Munich a 10 -meter-high Christophorus picture is painted. Because the west wall of the church, facing the sunset, marks the transition from this life to death and to the Last Judgment. Therefore, all representations of the saint have their place in this place.

Since ancient times, however, Christophorus is the saint who intercedes to God for all pilgrims, travelers and sailors. To this day, this has remained in the minds of the faithful, as witnessed by the Christophorus plaques among many Christians in their cars. However, the meaning of the saint is not exhausted in these two protective functions.

Rather, he should also be seen as a confessor of the Christian faith in a church-alien and hostile environment that preferred martyrdom to the death of the denial of his faith.

From his name and before the legend, he is a type of “Christian bearer” for every Christian who, in his baptism, participates in the crucifixion of the Lord in an unbelievable (mystical, i.e. sacramental) manner and thus also the pledge for the resurrection from the dead carries in itself.